In this episode I interview a special guest…my brother and partner in eCom Leverage, Daniel Leake!

We share a case study with some amazing results Daniel is getting in a marketing campaign he has been in charge of recently for one of our clients.

We were hired by a client to launch their brand on Amazon. Our strategy was to create sharable content online that would reach the client’s target market and then use that content to get people to sign up for a list.

The list of interested prospects will then be used to drive traffic and sales on Amazon, helping the client launch their line of products on Amazon.

Daniel recorded a very short (about half a minute) test video in his dining room, on his cell phone, that demonstrated one of the coolest features of the client’s product. Daniel uploaded this video in GIF format to the image sharing platform Imgur (pronounced Image-er).

Imgur is a platform of mostly young males, and there is a strong community feel to it. The community loves what it loves, and it hates what it hates. It wasn’t necessarily the best platform for this brand, but it was a great proving ground to run a test and see if the community upvoted it or downvoted it.

In the first 24 hours after posting the video, it got over 700k views and thousands of upvotes and many hundreds of comments. Lots of people were asking what the product was and where to buy it. It was getting shared so much online that it made it back around to our client without us even telling him we had posted the test video.

The client saw the potential and bought into the concept, so then it was time to start building out a marketing campaign with ad spend behind it.

Daniel took the exact same video and began running it on Facebook. The comments on the Imgur post provided a treasure trove of crowd-sourced potential captions for the Facebook video.

At the time of recording this episode, just 7 days after starting the campaign, the video had received almost 2 million views on Facebook. It was getting shared over 300 times an hour and was being used to build a subscriber list of over 800 people in one week. The cost per subscriber added to the list was $0.16/subscriber and dropping.

People are getting on the list to be entered in a giveaway drawing for the product, and after the giveaway everyone will be provided a special discount to purchase the product on Amazon.

You don’t have to spend huge amounts of money or do big productions to test a concept. Prove the concept first, then put money behind it.

If you can get customers asking you what your product is, where they can buy it, etc. without you ever first trying to push that information on them, then you’re really on to something. Now you’re not selling when you tell them where to buy, you’re just helping them by providing information they want.

The point we most strongly emphasized at the end of the podcast is to take action! Sure, this all sounds good, but you’ll never learn whether it can work for your business until you take action and try something!

Pull your cell phone out of your pocket (or even better, have an employee or customer do it), record a short, non-salesy video that would be of interest to your target market and get shared around by them, then upload it to Facebook with $20 ad spend behind it, and see what happens!

Or…if you’d rather get our help, read below.

Do you need help strengthening your brand’s following and growing sales online? That’s what we specialize in! Put the frustration and money wasted on ineffective marketing campaigns behind you. Apply to become a client!

Get My FREE Cheat Sheet

Join my email list and I'll send you a list of 5 awesome FREE tools every Amazon seller should know about:

(I will never spam you. Unsubscribe at any time.)

Success! Now check your email to confirm your subscription.

Learn to Grow Your Amazon Sales 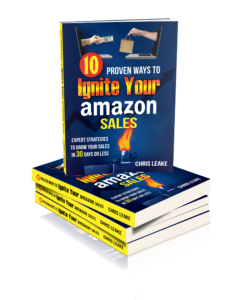